Then, what are the similarities and differences between the food cultures of Japan and Korea, from a scientific point of view?

A webinar entitled "Japanese Food Culture and Umami - Rediscovering dashi and umami" was held on April 6, 2021*.  It was for the students of Sejong University in Korea and was attended by 76 students studying restaurant management.
＊This lecture was sponsored by AJINOMOTO KOREA, INC. and Sejong University, supported by the Umami Information Center.

The one and a half hour lecture by Dr. Kumiko Ninomiya, a director of UIC, was given with the interpretation by Mr. Kim Myungjae of AJINOMOTO KOREA, INC.
Dr. Ninomiya began her lecture with the relationship between umami and deliciousness, and the characteristics of the climates of the two countries. Because there is a close relationship between climate and food culture.

She pointed out the similarities between Japan and Korea in that forests cover a large area of each country. She also explained that the staple food of Japan and Korea is rice, and that they share a culture of fermented foods made from grains.  On the other hand, as for the differences, Dr. Ninomiya coherently explained that miso and doenjang, soy sauce and ganjang look similar, yet the types of bacteria used for fermentation are different.

It was also explained why Japanese cuisine is rich in umami.  There is a big difference in the amino acid components contained in Korean soup stock and Japanese dashi.

Then she explained the basics of umami including the history of umami research. 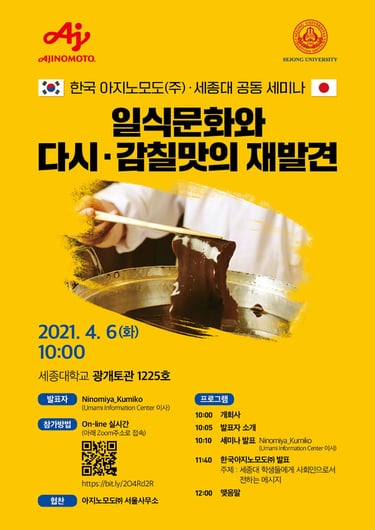 The lecture attracted the students and the college staff who attended.
In the post-lecture questionnaire, more than 90% of the participants gave high marks to the lecture, which indicated the high level of interest in Japanese food culture. Participants commented on the lecture, saying, "I could clearly understand that two countries have a close relationship.” “This lecture should be a regular event, not just this time.”

We would like to express our gratitude to AJINOMOTO KOREA, INC. who provided a lot of support for this webinar, from the preparations to the operation on the day and the questionnaire compilation after the event.
UIC will continue to disseminate correct information on umami in cooperation with Sejong University and AJINOMOTO KOREA, INC.