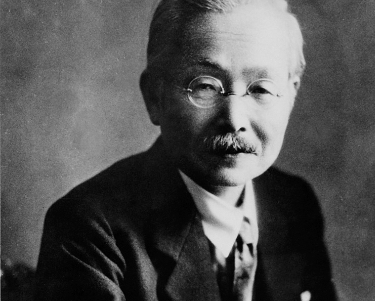 Ikeda was the first to identify glutamic acid as the source of savory taste. He named this "umami" and designated it as the fifth of the five basic taste modalities.

Monosodium glutamate (MSG) was discovered in 1908 by Kikunae Ikeda, a professor at the School of Science's Department of Chemistry at the Imperial University (now called The University of Tokyo). 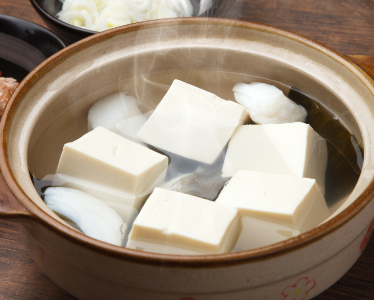 Kikunae was born in 1864 as the second son of the affluent Harunae Ikeda, a rusui (official master of the house in the domain lord's absence) for the Satsuma Clan's Kyoto residence. In 1873, nine-year-old Kikunae moved together with his progressive-minded father to Tokyo where he studied English at a private school for two years. After returning to Kyoto, Kikunae enrolled in a school specializing in Chinese classics, after which he moved on to study at the Daiichi 1 Prefectural Junior High School. At the same time, he continued his English language education under a female missionary, progressing to a level where he was able to handle interpretation tasks. However, Kikunae's parents later relocated to Osaka City, and there he studied chemistry under the director of the nearby Osaka Hygienics Laboratory and became deeply fascinated with the field.

Kikunae longed to continue with his education by enrolling in an advanced school and studying chemistry in greater depth, but the Ikeda family's poor finances at the time made it difficult. He left home in 1881, at the age of 17, to move to Tokyo and pursue his dream, and thanks to his impressive past academic achievements he received government financial support for his education and was able to enroll in the Department of Chemistry, School of Science at the Imperial University (currently The University of Tokyo). After graduating in 1889, he taught for seven years at the Tokyo Higher Normal School (currently the University of Tsukuba), and then became a professor at the Imperial University's School of Science in 1896. 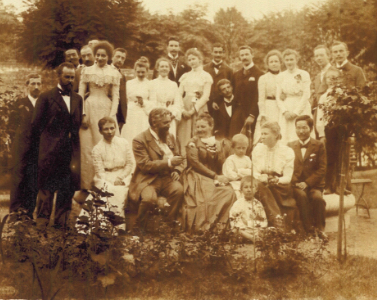 Starting in 1899, Kikunae Ikeda studied abroad (with Japanese national government funding) in Germany at Leipzig University. Majoring in physical chemistry, he studied for two years under Professor Wilhelm Ostwald, who would go on to receive the Nobel Prize in Chemistry in 1909. Ikeda was surprised at the physical size and nutritional conditions of German people at the time, and he developed a strong desire to improve the nutritional status of Japanese people back home. He also tried tomatoes, asparagus, meat and cheese for the first time while in Germany, and through these experiences he sensed that another basic taste was present in foods aside from the four currently recognized tastes of sweetness, sourness, saltiness and bitterness. This realization would prompt his later research into umami (savoriness). Ikeda studied abroad in the United Kingdom from May 1901, and returned to Japan in October of the same year. He took the position of professor at the Imperial University upon his return and focused his endeavors on the field of physical chemistry, a new academic field in Japan at the time. Ikeda's theoretical studies in the area of chemistry would be pioneering and influential, leaving lasting marks on the field. At the same time, he began to grow more interested in practically-focused applied research aimed at improving people's lives and helping society to develop and advance.

Ikeda was known to be an avid reader, and as his personal history reveals that he was exposed to a wide range of reading materials in fields including Chinese classics, English literature, history, Japanese literature, economics, religion, and the study of thought, among others. From these areas he gained a diverse range of knowledge, and during his time studying in the United Kingdom he lodged in the same building as Japanese literary great Natsume Soseki, who is believed to have been impressed with and influenced by Ikeda's wide-reaching knowledge. In addition, Ikeda is believed to have been strongly influenced by Dr. Ostwald during his time studying in Germany. Ultimately, Ikeda would go on to become an idealist working in the field of science, making contributions to greater happiness for and advancements by all of humankind. His research incorporated an impressive number of unique ideas, which he used to develop a method for producing salt through evaporation of seawater by heating, create a means of preventing pollution by converting sulfurous acid gas back into sulfur, and analyze the constituents of hot spring waters, among other accomplishments. Throughout his lifetime, Ikeda acquired 32 patents in Japan and 17 overseas. 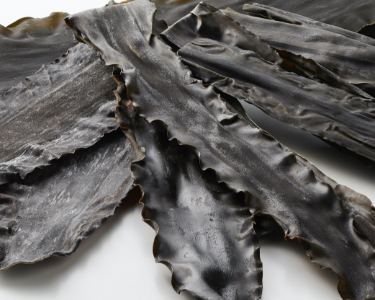 Discovery of Umami in Kelp

Ikeda's discovery of umami was initially inspired in the spring of 1907 by a bundle of kelp brought home by his wife, Tei, intended for use in preparing dashi cooking stock—a central ingredient in Japanese cuisine. Upon sampling the kelp, he noticed that the same unique taste discovered in the tomatoes, asparagus, meat and cheese he had eaten in Germany was unmistakably present in the kelp dashi as well. Based on this realization, he began to research the constituents present in kelp. Since ancient times, common beliefs held that there were four basic tastes—sweetness, saltiness, sourness and bitterness—and that any other tastes encountered were the result of mixing combinations of these four. However, Ikeda found that the taste he encountered in the kelp dashi was different than any of the established four, and was confident that he had discovered a fifth basic taste. He used of the laboratory facilities at the School of Science of the now-renamed Tokyo Imperial University to carry out experiments aimed at the extraction of the umami factor from kelp, through which he discovered that glutamic acid was a central element in the taste of the dashi. Ikeda then pursued the commercialization of the primary umami element glutamic acid in the form of an umami seasoning product. Upon realizing that his discovery and commercialization of an umami seasoning had to potential to solve the problem of insufficient nutrition among the Japanese people, his mere interest transformed into what he considered to be his calling as a scientist.

To this end, Ikeda pursued experiments aimed at neutralizing glutamic acid. Weakening its acidity resulted in a sour taste, so he came up with the alternative approach of dissolving glutamic acid and then adding sodium bicarbonate to neutralize it, which achieved a pronounced increase in umami level. Ikeda tried potassium glutamate, calcium glutamate and other combinations, but sodium glutamate proved to be the most readily soluble in water and provided the best resultant flavor, so he concluded that the creation of a sodium glutamate from sodium concentrate was optimal. Based on these findings, he developed a production method for his monosodium glutamate (MSG) product, submitted a patent application in April 1908 for "the production method for a seasoning whose primary ingredient is a glutamate," and received patent approval on July 25 of the same year. 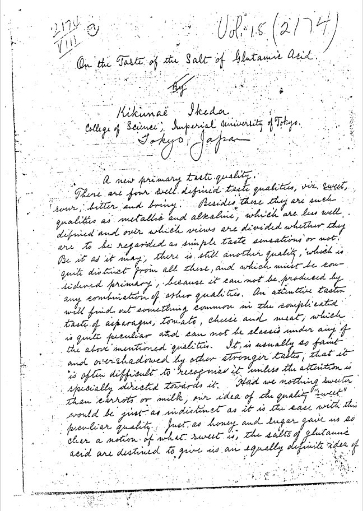 Dr. Kikunae Ikeda, who discovered that glutamic acid was the primary source of umami (savory) taste, successfully patented his production method for a seasoning using glutamic acid as the primary ingredient (monosodium glutamate, or MSG). In recognition of this achievement, Ikeda was officially selected as one of the “Top Japanese Great Inventors.” (This list of ten historic Japanese inventors, created and published by the Japanese Patent Office, was released on April 18, 1985 to commemorate the 100th anniversary of Japan's establishment of their system of industrial rights.)