Green tea contains a significant amount of glutamate, a type of amino acid which imparts a pleasant, savoury umami taste. Anyone who has tried green tea will perhaps have sensed varying levels of sweet, umami, astringent, and bitter tastes, according to blend and variety. The sweet and umami tastes are said to result from the presence of theanine and glutamate, both types of amino acid, the astringent taste from catechin, and the bitter taste from caffeine. How is the astringency (catechine) in green tea linked to umami-rich theanine? It is known that catechin, the astringency-imparting metabolite, is formed from theanine, an amino acid imparting both the umami and sweet tastes, through a reaction with the light of the sun on tea leaves as they grow. It stands to reason, then, that large amounts of theanine are found in those varieties of green tea said to be rich in umami and sweet tastes, such as the so-called first flush tea (ichibancha), made from very young tea leaves, picked early, and premium green tea (gyokuro), made from leaves grown in the shade, and thus protected from the catechin-forming sunlight. It is of note that the chemical composition of theanine is extremely similar to that of glutamate.

Strength of umami differs from tea to tea

Making yourself a cup or two of some of the many different green teas now available might be the perfect way to sit back, relax, and enjoy the umami taste. 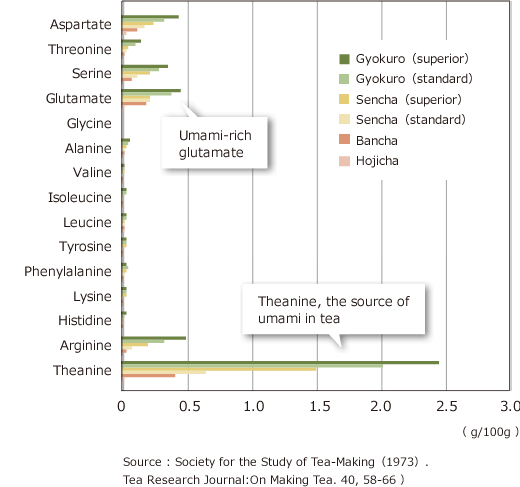