This lively summer salad brings together each of the five basic tastes to give a flavour both complex and revitalising. Umami-rich tomatoes, dried shrimp and peanuts are brought together with sweet watermelon and salty fish sauce as well as lime juice for refreshing sourness and a touch of cucumber rind for a bitter flavour. The sublime combination of the tomatoes and the fish sauce gives the dish an unsurpassable richness of flavour.

“Umami is a key consideration when I am thinking up new recipes, and it provides a crucial base when bringing out the complex and subtle taste of a dish. As a Japanese person brought up with an awareness of umami, incorporating it into my meals is a natural process for me. In my restaurants at the moment, we use three different kinds of fish sauce. Fish sauce has been used in Italy since Roman times, and we are currently using this Italian fish sauce along with a Vietnamese and a Thai sauce. I hope that in the future, more and more people will come to have a good understanding of umami and the role it plays in cuisine.” 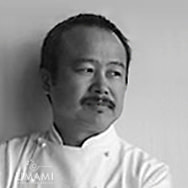 The 2003 winner of the James Beard Foundation’s award for Best Chef in California and the first Japanese chef to have two restaurants with Michelin stars has certainly come a long way from his beginnings on his family’s Japanese rice farm, but his cuisine still pays homage to the great respect for food he gained there. After going from culinary school in Osaka, Japan to French and Italian restaurant kitchens in Tokyo, Chef Hiro Sone ended up in the kitchens of the renowned Wolfgang Puck. It was while training at Hollywood Spago, in preparation for the opening of Tokyo Spago, that Sone met his future wife and business partner Lissa Doumani. A few years later, the pair opened Terra restaurant in Napa Valley to overwhelming acclaim. In November 2005, they opened Ame in San Francisco.