Dry-cured ham, often called Prosciutto, with the name of its Italian variety, is recently getting popular and many varieties are becoming available on the market. A dry-cured ham is, unlike cooked hams that are more common, unheated in its manufacturing process.
The most renowned dry-cured hams in the world are Prosciutto di Parma from Italy, Jamone Serrano from Spain and Jinhua ham from China

These are all made of pork, salt-cured, dried and ripened for a considerable amount of time. production of dry-cured hams originally started for the purpose of preservation of meat and the suitable production method for the climate of each region has been established through generations. Below is the report about umami found in one of dry-cured hams from the mountain area of Iberia Peninsula, Spain.

Thus, a dry-cured ham preserves well even without heating process because of its low moisture content and mold that has decay-preventing effect.
Here is the result of the research by a Spanish scientist, Dr. J. J. Cordova, about ripening of jamon iberico, a dry-cured ham of Iberian pig.

The graph shows that protein in pork is degraded by proteolytic enzyme into amino acids, and glutamate, umami substance, is increasing. As an example, let’s look into the climate of Badajoz in the mountain area of the western Spain near the border with Portugal, one of the major production areas of jamon iberico. In January the highest temperature is 1℃, the lowest is 3℃, precipitation is about 50mm. In August the highest temperature is 33℃, the lowest is 17℃ and precipitation is almost zero: the difference of temperature within a day is great and the humidity is very low. It can be said that low temperature and high humidity in the winter as well as high temperature, low humidity and large daily temperature range in the summer is desirable for flavorful, umami-rich dry-cured hams. 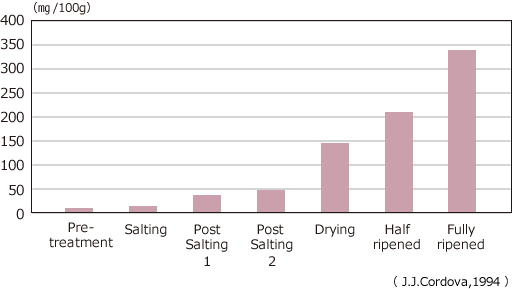