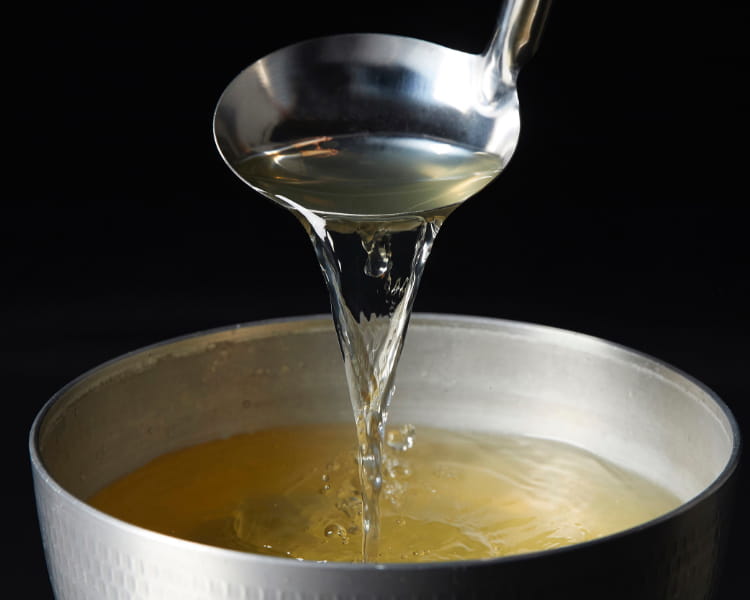 Dashi and Umami –
The Essence of Japanese Cuisine

Although Japanese cuisine is rich in diversity and visually attractive, there is one element underlying its appeal that is not apparent to the eye. This is a deceptively simple element called “dashi,” the stock that forms the basis of, and invisibly permeates much of, Japanese cuisine. 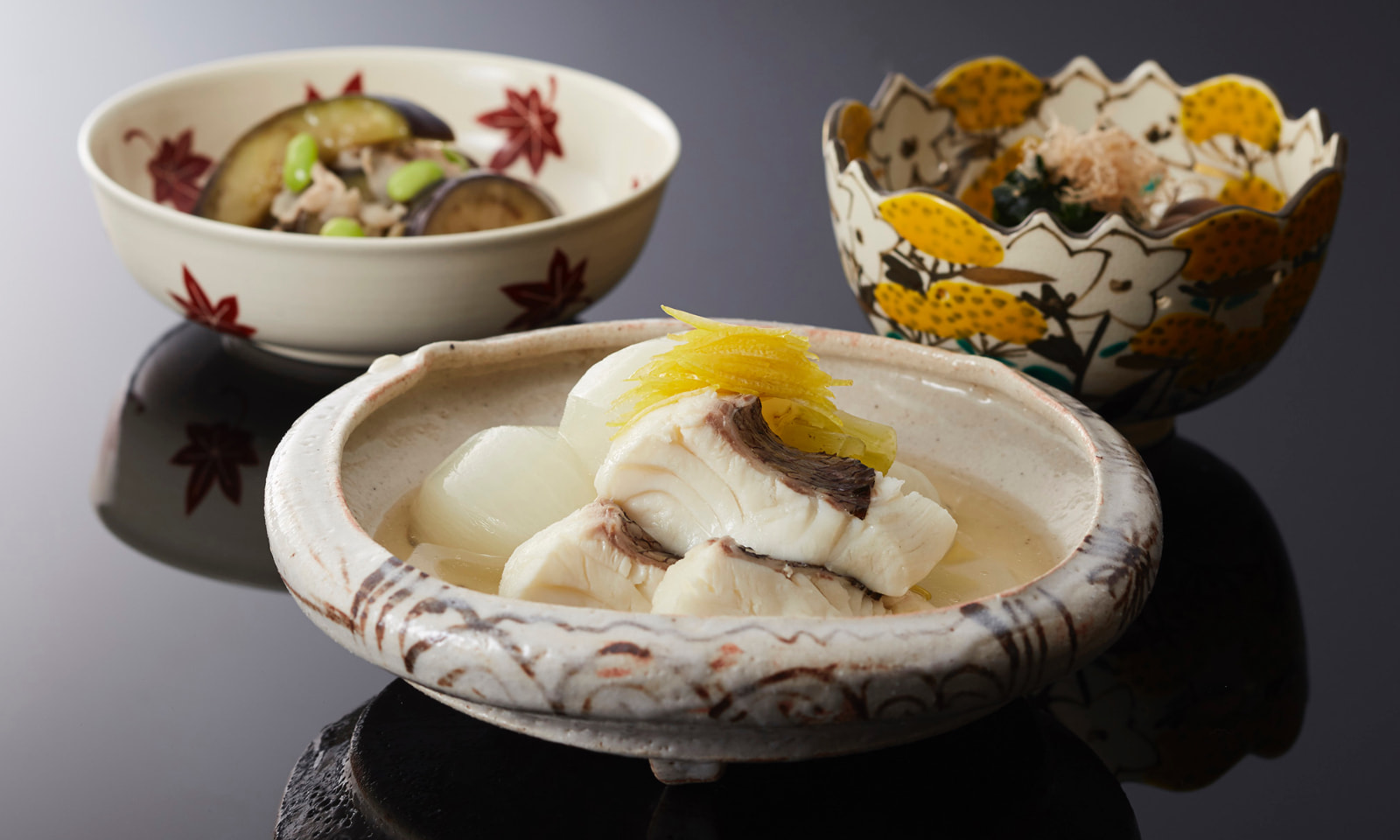 Dashi differs from other kinds of stock in that rather than using simple ingredients boiled over a long period, as is the case with Western bouillon, it uses carefully prepared ingredients, patiently matured, which are only soaked in water or heated briefly so as to extract nothing but the very essence of the ingredients’ flavor. 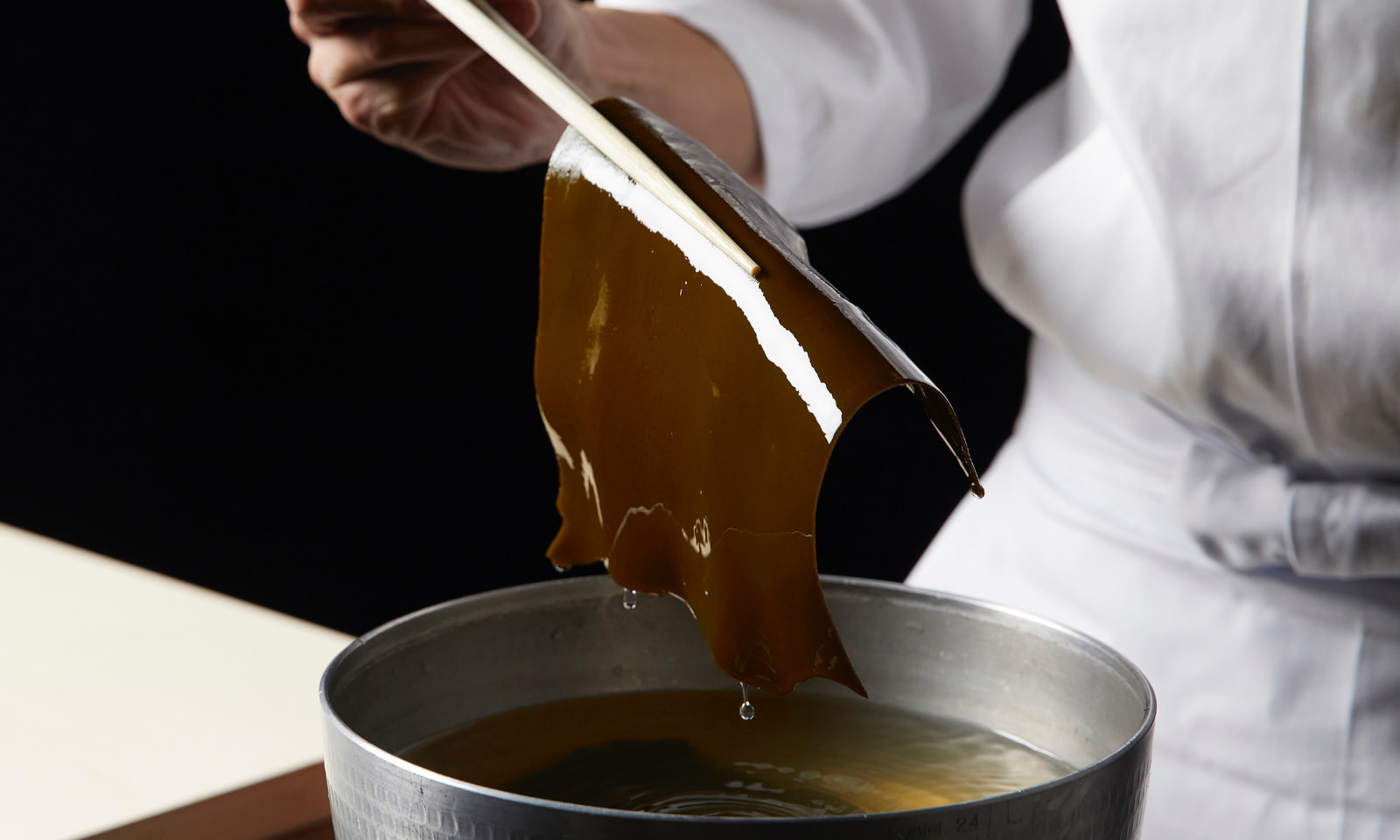 Dashi most commonly utilizes a combination of kombu (kelp seaweed) and katsuobushi (dried bonito flakes), but other ingredients used to make dashi are shiitake mushrooms and niboshi (small dried fish). Dashi making has evolved over a long period of time. Boiling is known to have been used in Japanese cooking since the Jomon period (c. 13,000–300 BC), and the stock from shellfish and fish bones was used to flavor other dishes. 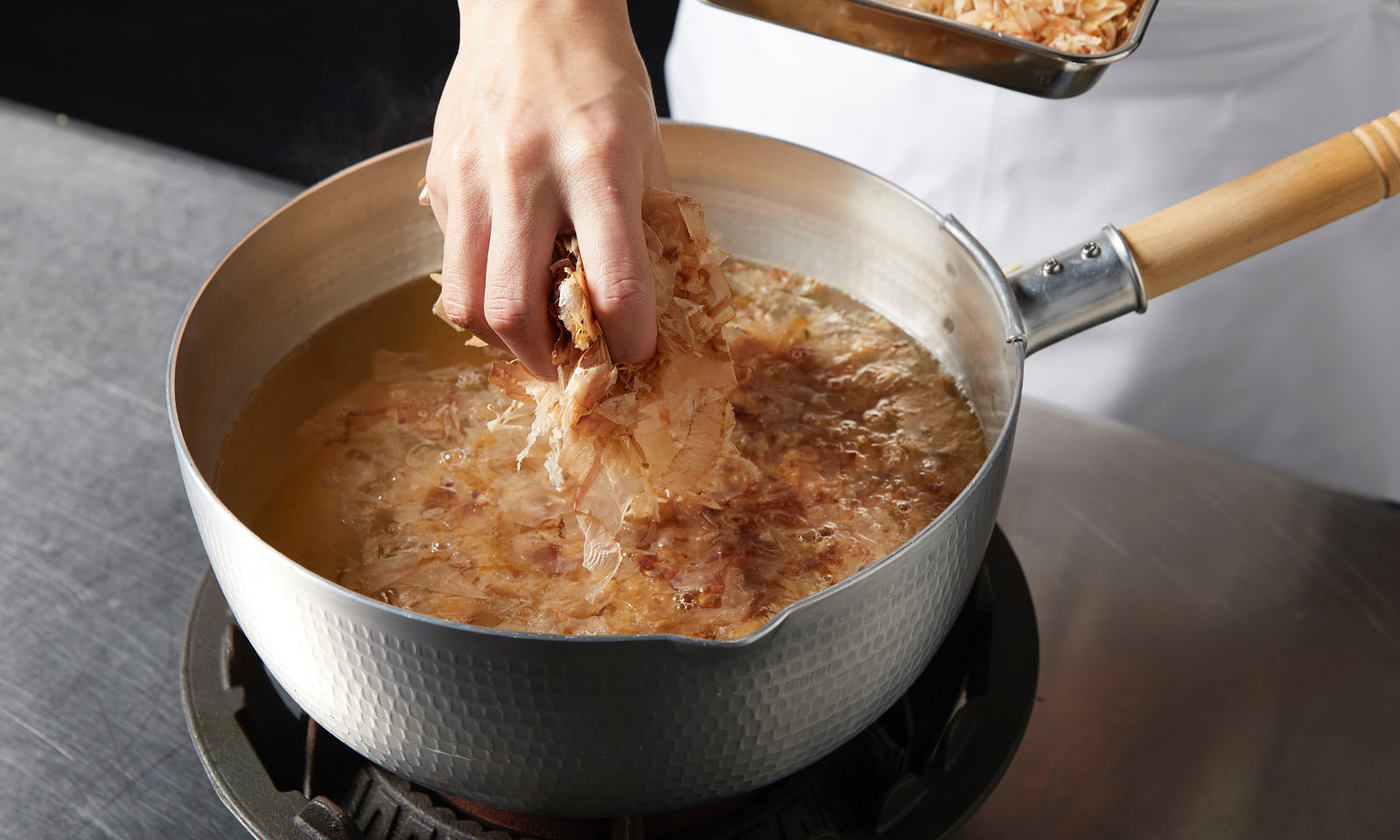 By the seventh century, a dashi using kombu and katsuobushi had developed. This was refined further and has become Japan’s most indispensable cooking stock, generally used in two forms – ichiban (primary) dashi and niban (secondary) dashi. Despite its hidden role, dashi could be said to be the heart of Japanese cuisine, not because of the prominence of its own flavor but because of the way it enhances and harmonizes the flavors of other ingredients. The secret of Japanese cuisine is the art of enhancing and harmonizing. 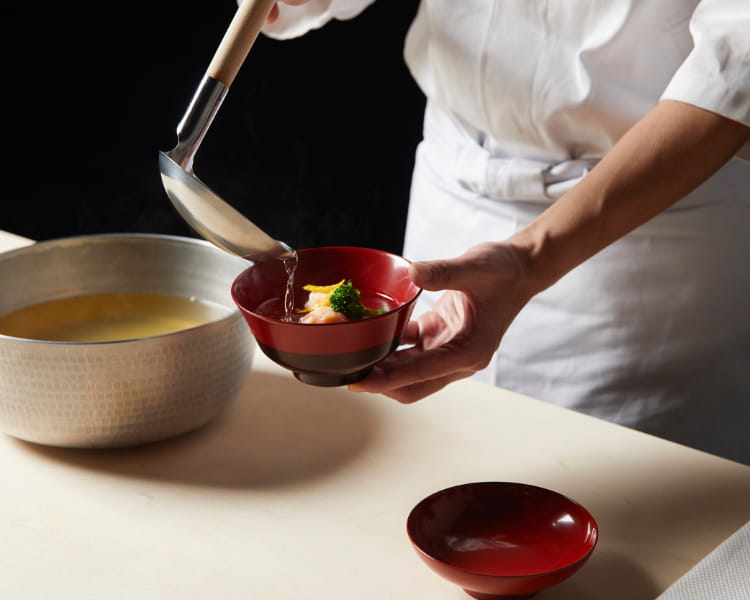 Umami – The Key to Dashi’s Taste

A single word holds the key to the magic of dashi – umami. In 1908, Prof. Kikunae Ikeda of Tokyo Imperial University discovered a taste in kombu dashi not accounted for by any combination of the basic tastes of sweet, salty, bitter, and sour. He identified the source of this taste as glutamate. The taste itself he dubbed, “umami.”

In 1913 and 1957, there followed the discovery of inosinate and guanylate, respectively, as sources of umami. Since the 1980s, further research has led to a wide international acceptance of umami as the fifth taste. The ingredients of dashi are all rich in the substances that are the source of umami. Kombu has the highest natural levels of glutamate of any foodstuff in the world. Katsuobushi and niboshi contain high levels of inosinate and dried shiitake mushrooms of guanylate. The benefits of umami are multiple. Aside from being the fifth basic taste, it also has a synergistic effect. When two sources of umami are combined, the umami taste is boosted, producing a result greater than the sum of the ingredients. Umami also serves to enhance other tastes, bringing a satisfying fullness and freshness to the food it permeates. 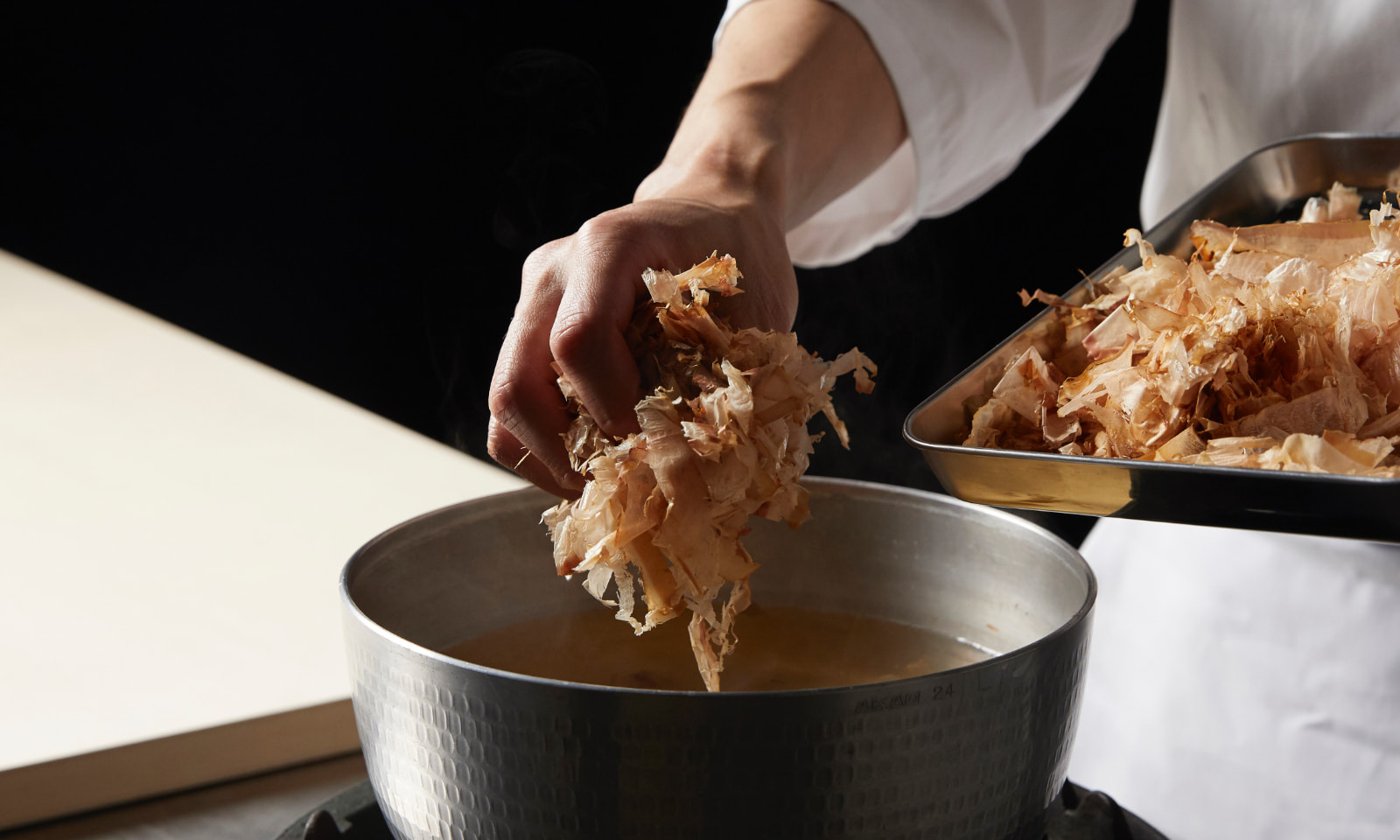 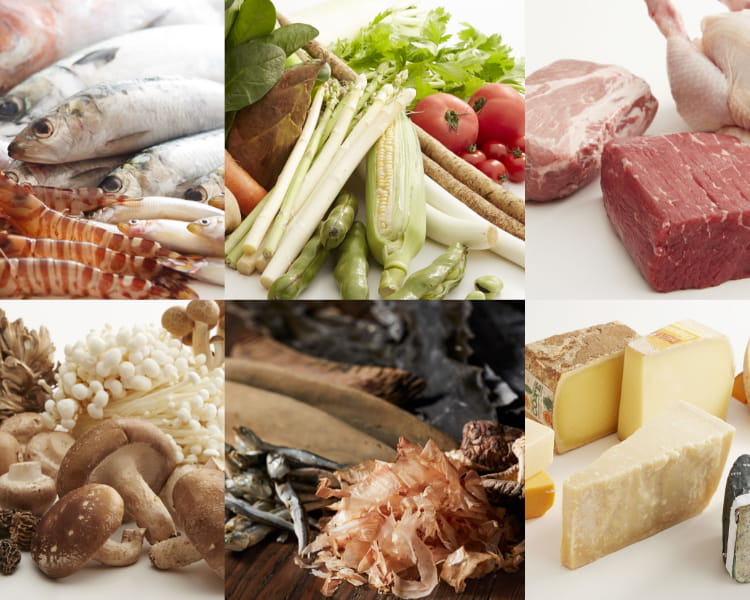 Umami is the fifth taste, joining sweet, sour, salty, and bitter. These are unique tastes that cannot be created by mixing other tastes and are known as the basic or primary tastes. Umami is a general term used mainly for substances combining the amino acid glutamate and/or the nucleotides inosinate and guanylate, with minerals such as sodium and potassium. 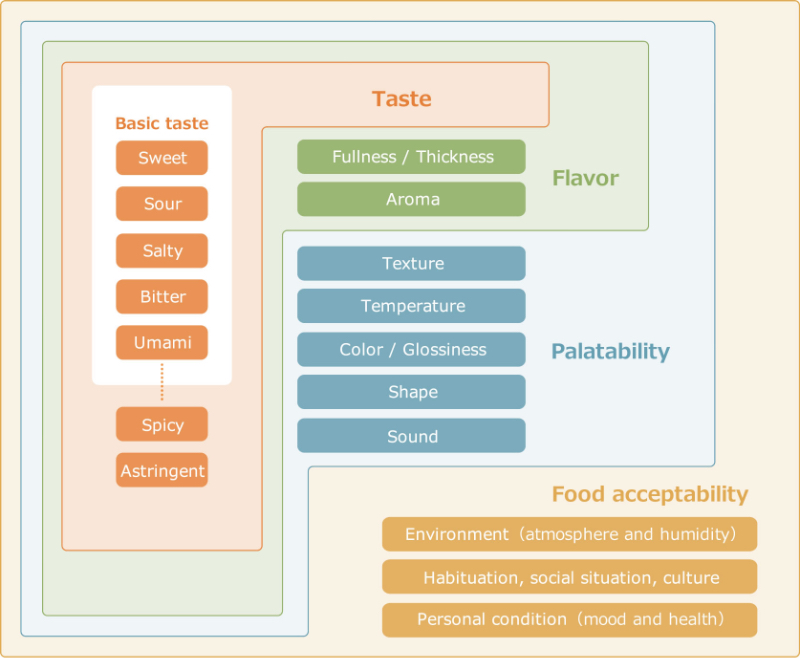 Whether something tastes good or not is a comprehensive yet subjective evaluation determined by elements such as taste, aroma, texture and temperature, besides other factors such as appearance, color and shape, as well as one’s physical condition, surrounding environment, cultural background, and previous experiences. Of these various elements, umami in balance with the other basic tastes (sweet, sour, salty, and bitter) plays an important role in determining the deliciousness of a dish. 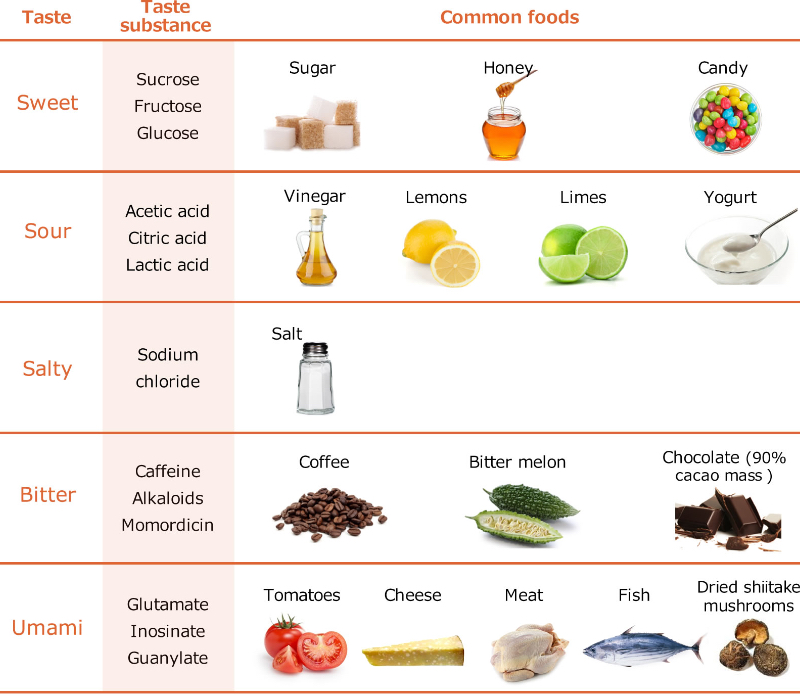 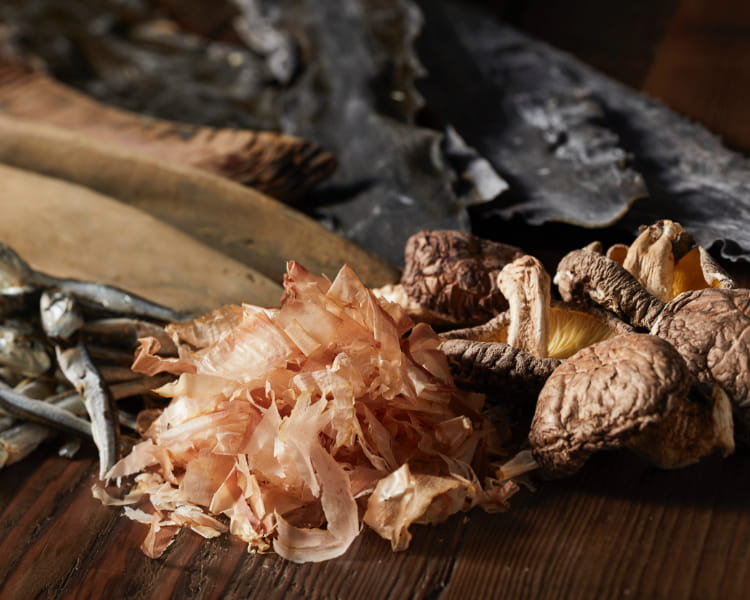 The Japanese stock known as dashi is an indispensable part of Japanese cuisine. Made using a number of very special ingredients, it serves to transform the flavor of any number of dishes. the subtle flavor of most types of dashi might not be easily identified in a dish; what dashi does, however, is to accentuate and draw out the flavor of other savory ingredients in the dish, resulting in an increased depth, intensity, and complexity in flavor. How the dashi achieves this is intrinsically linked to umami, the fifth basic taste alongside sweet, sour, salty, and bitter. 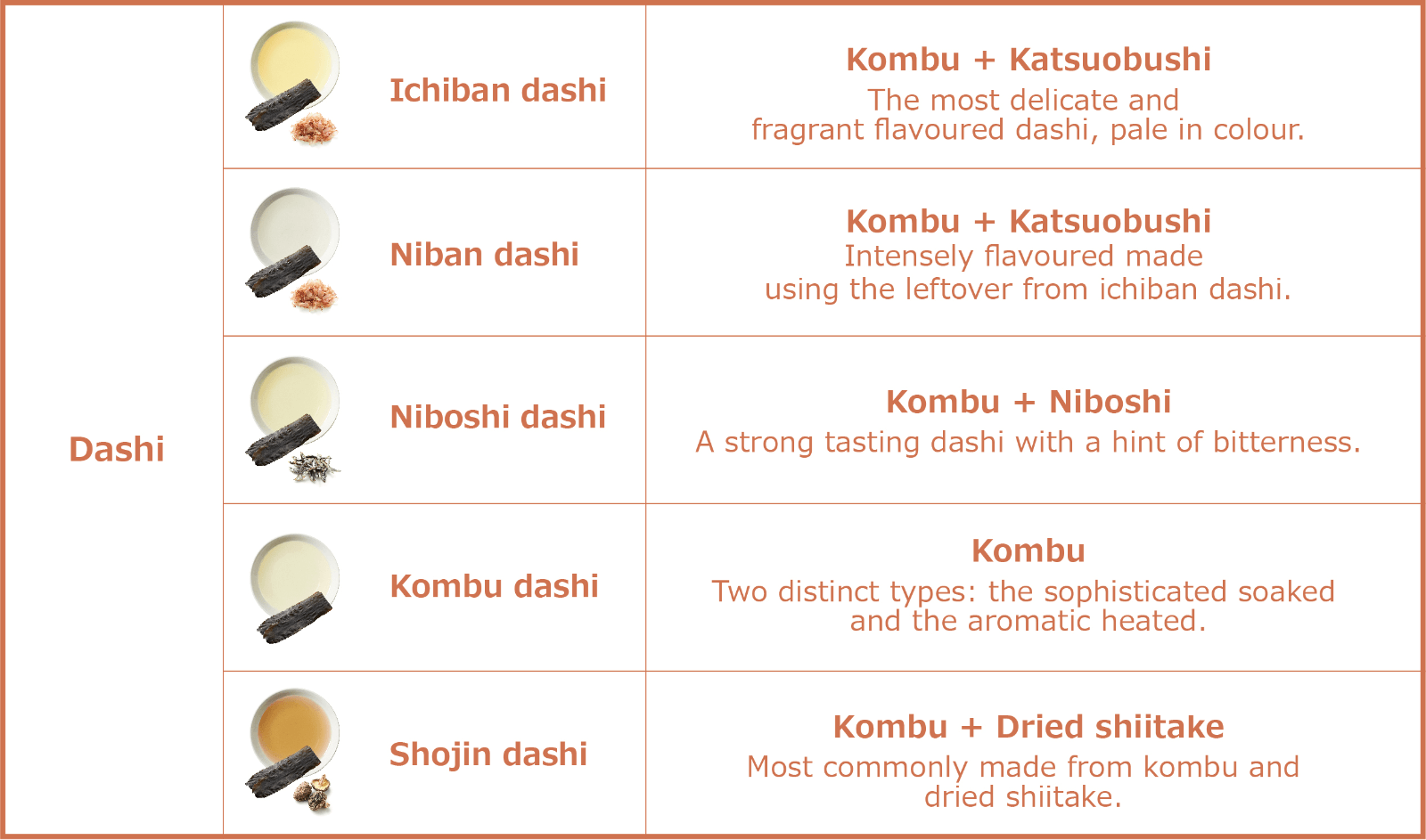 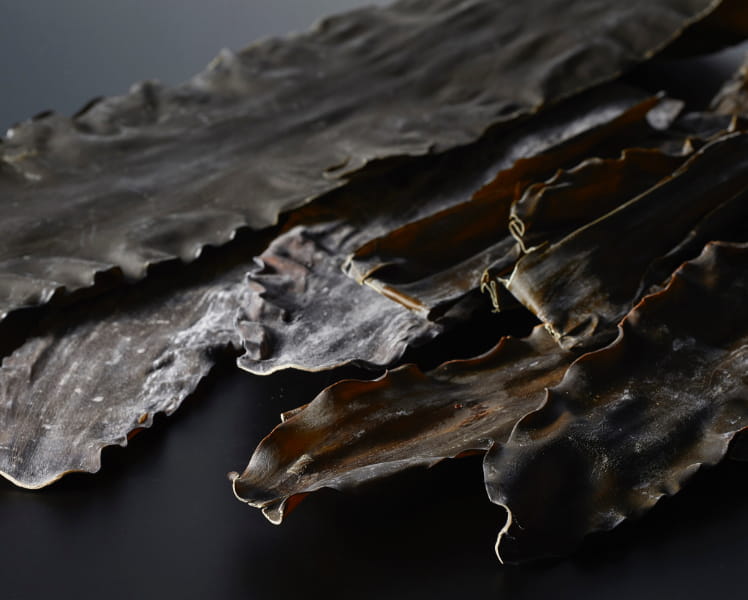 Kombu, which grows in abundance off the northern island of Japan, Hokkaido, is harvested and dried before use. It can also be used on its own to make vegetarian dashi. The choicest kombu (kelp) used to be shipped with great care from far off Hokkaido to Kyoto, the ancient capital of Japan that flourished for nearly a thousand years. In the Heian Period (794–1185), shojin ryori, a type of vegetarian cooking, was introduced along with the teachings of Buddhism that warned against the taking of life. The ingredients used in shojin ryori consist entirely of vegetables and soybean products – meat, fish, or seafood are never used. Kombu dashi (kelp stock) is indispensable for enhancing the taste of the vegetables used in shojin ryori. 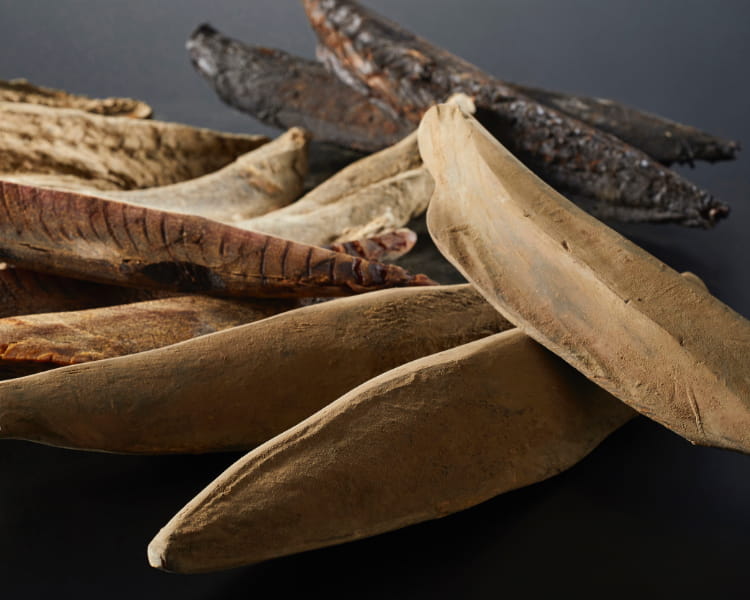 Katsuobushi is made of bonito or skipjack tyna, a sea fish that appears in Japanese cuisine in a number of guises. The fish is dried and then impregnated with a beneficial mold that induces fermentation, leading to a deeper, richer flavor. The process takes several months and results in a surprisingly hard, yet flavorsome, foodstuff. Once the blocks are ready, they are shaved, using a special plane, for use in cooking. Other fish such as tuna, mackerel, and sardine can also be used in this way. 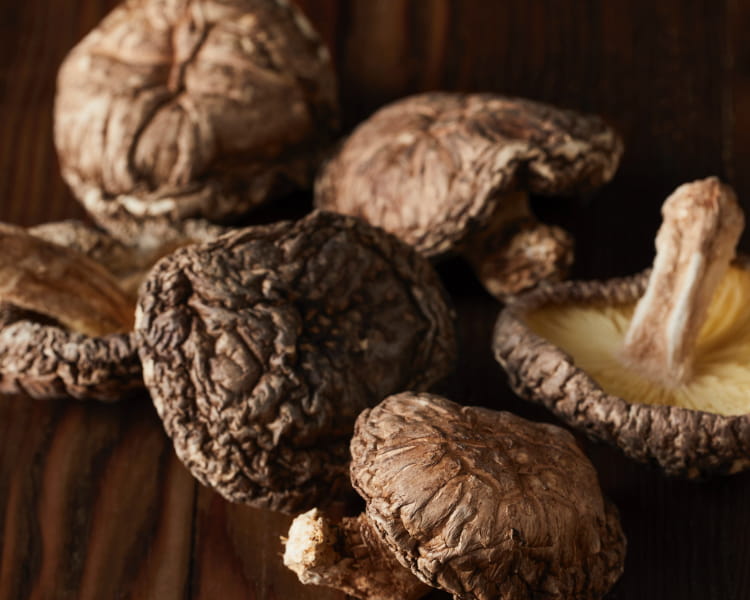 Another ingredient common in vegetarian dashi is Japan’s best-known indigenous mushroom, the shiitake. It is sun-dried to intensify the taste before being soaked in water to create a delicious stock that complies with the strict rules of shojin (Buddhist vegetarian) cuisine. 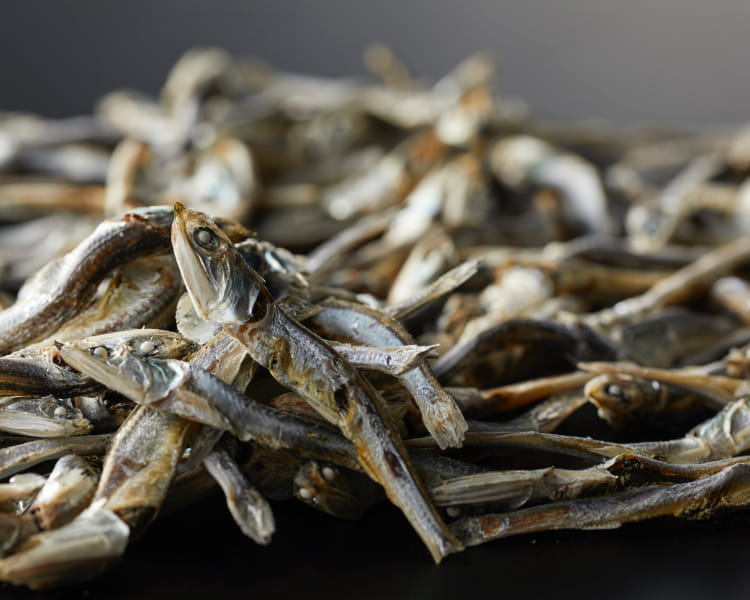 The other main ingredient used in dashi is niboshi, a term that covers a number of different types of small, dried fish, such as anchovy and pilchard. They are traditionally sun-dried and then cooked in water to create the stock, which has a strong taste with a slightly bitter edge, and is suited to robust dishes, such as miso soup and hotpots. 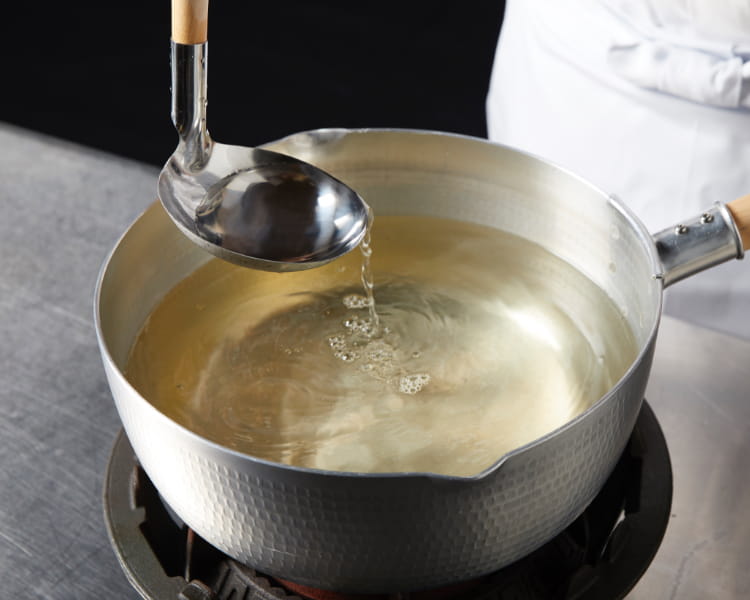 Classic dashi is made using kelp and katsuobushi (dried bonito flakes). A range of stocks of different character can be created from just these two ingredients. The most prized is ichiban (primary) dashi, which is made by soaking or gently heating the finest kombu and briefly adding katsuobushi. It is used in dishes, such as clear soups, where the aroma and quality of the stock is of utmost importance. Meanwhile, niban (secondary) dashi is made by reusing the ingredients from ichiban dashi to create a less refined but more versatile stock. 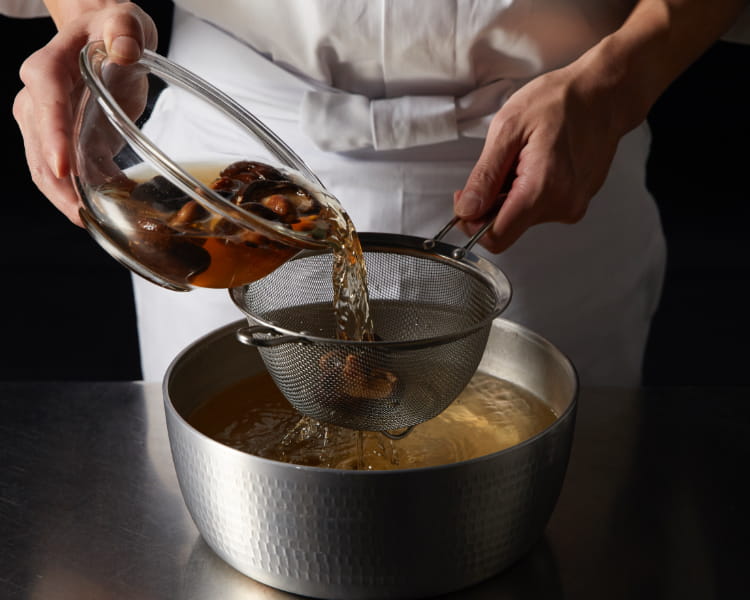 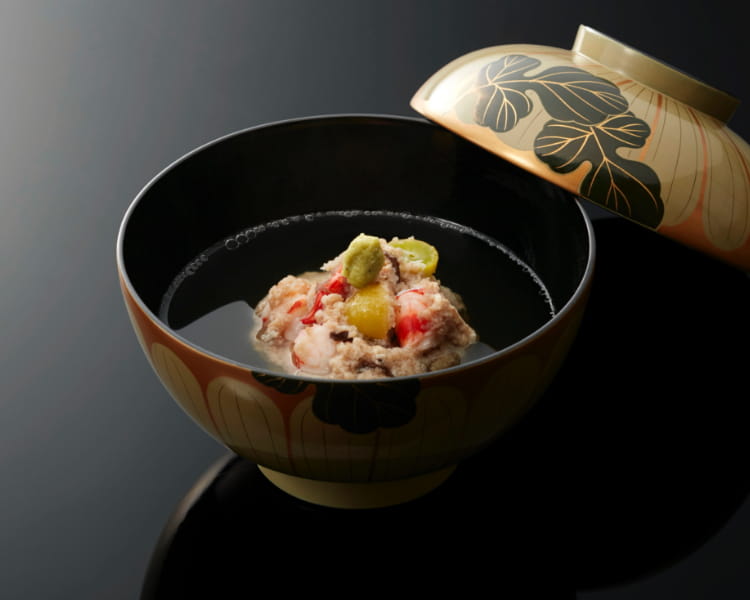 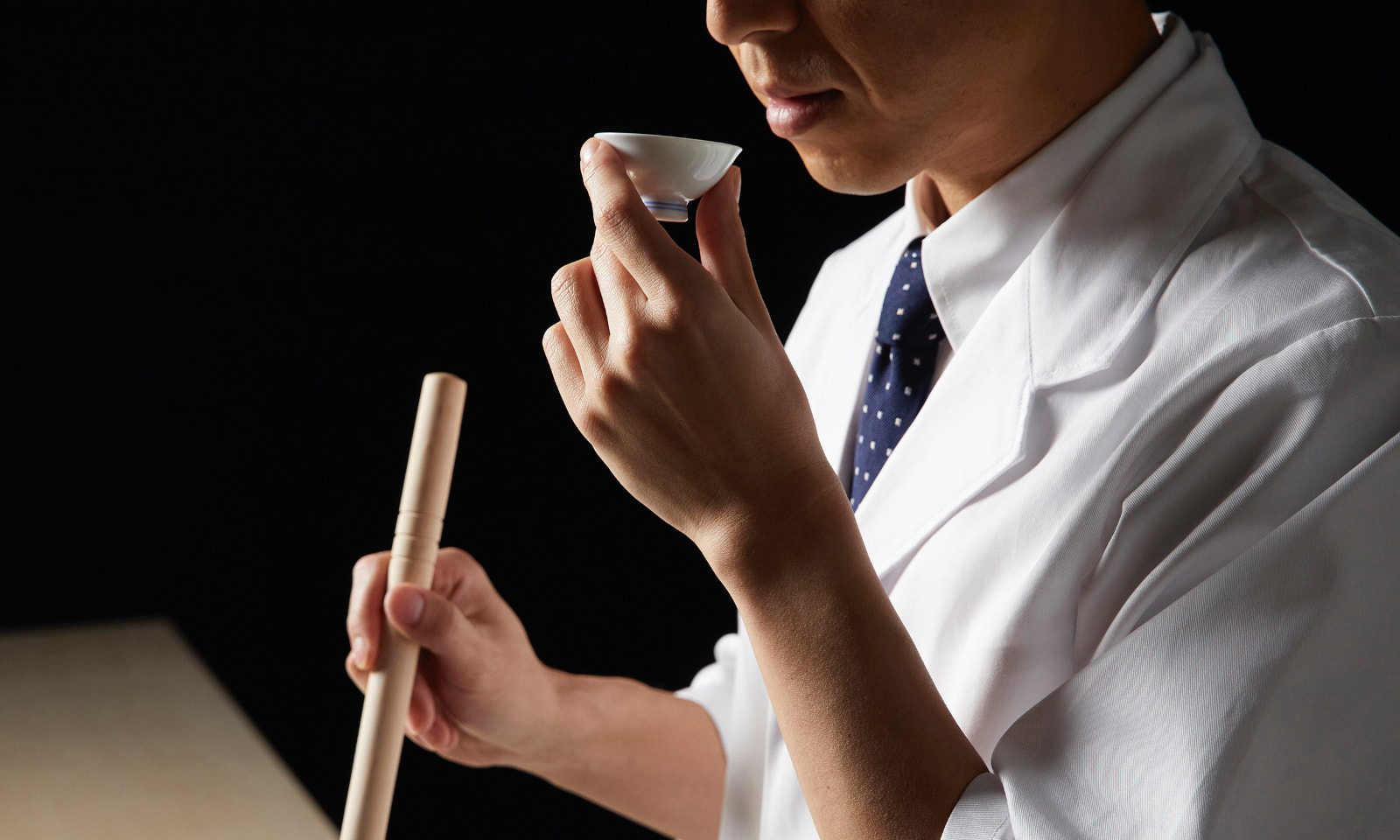 Kombu dashi contains umami of glutamate, a kind of amino acid. In ichiban dashi, the synergistic effect that occurs from glutamate and inosinate of nucleotide makes us taste umami 8 times more than the quantity of the real umami substance. A research study reported that umami synergy becomes the strongest when the amounts of glutamate and inosinate are almost the same. So, the recipe of ichiban dashi served at restaurants in Kyoto can be said to be very reasonable. 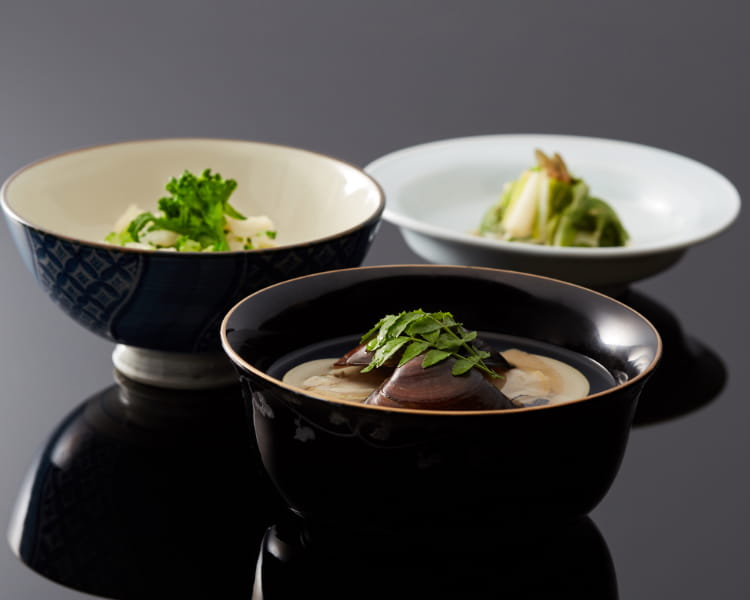 Recent years have seen a growing shift in the developed world toward fewer calories and animal fats, as people aimed to prevent lifestyle diseases and maintain good health. As part of this dietary trend, Japanese cuisine has enjoyed burgeoning popularity, thanks to its health properties. Rather than relying on animal fats, Japanese cooking uses the umami of dashi to highlight the intrinsic flavors of ingredients, and chefs from all over the world have started visiting Japan to study these cooking techniques. 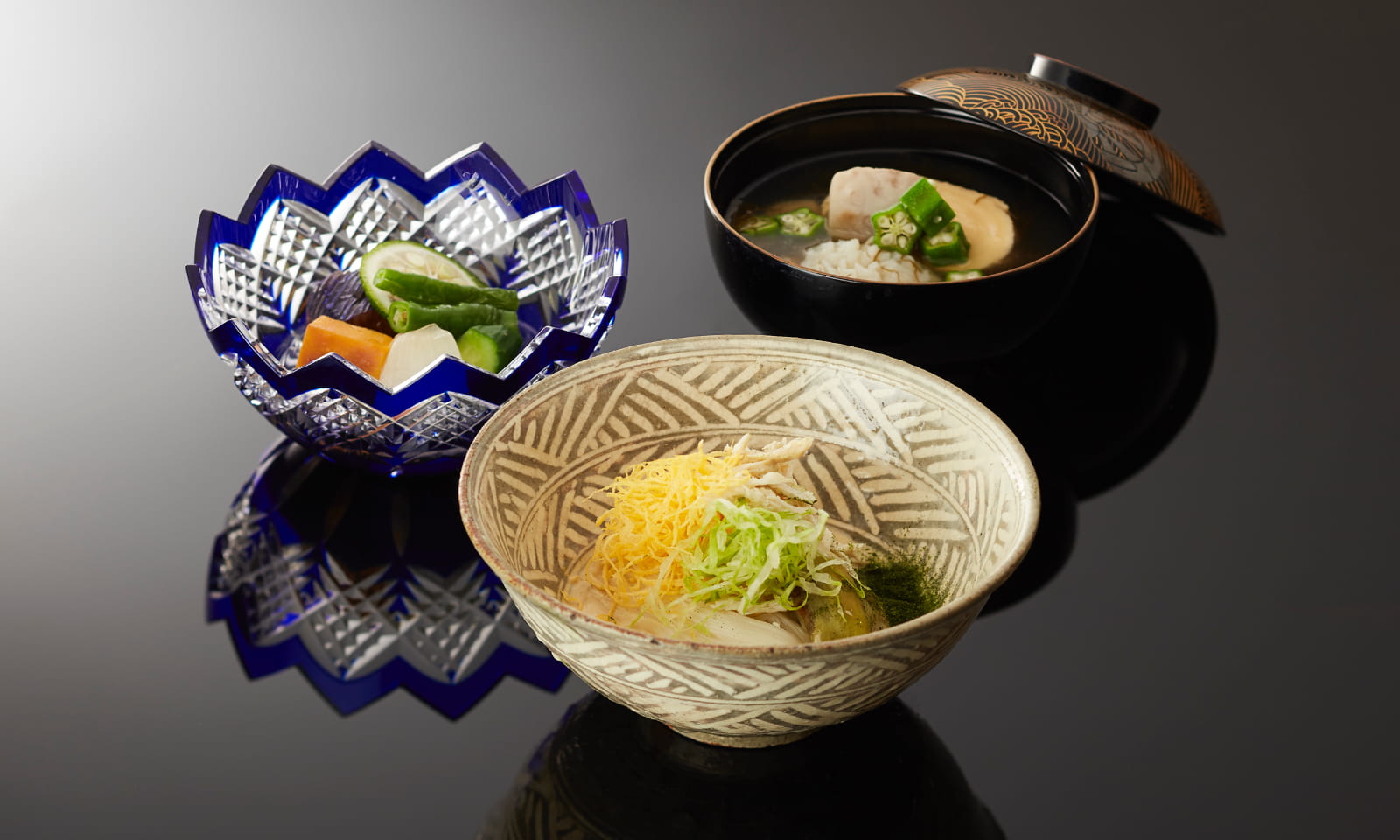 In learning how to make Japanese dashi, they master the use of umami as an alternative to animal fats before going on to develop their own approaches to umami-oriented cooking. For instance, a kaiseki-style bento box made by one traditional Japanese restaurant uses over 40 different ingredients yet contains fewer than 500 calories. The secret is the Japanese cooking technique of using the umami of dashi to enhance flavors.