On 22 April, the Umami Information Centre (UIC) held an online lecture* on 'Japanese Food Culture and Umami - Rediscovering Dashi and Umami' at Woosong College in Korea. The lecture was attended by 40 first and second- year-students studying Japanese Culinary Arts.
＊This lecture was sponsored by AJINOMOTO KOREA, INC. and Woosong College, supported by the Umami Information Center.

Umami substances are found in many foods. Therefore, people all over the world taste umami on a regular basis. However, because it is subtle taste, many people are not aware of umami and do not realize that the taste they are tasting is umami.
In this lecture, we spent time on tasting and observation of ingredients so that Korean students studying to become Japanese cuisine chefs could recognize the characteristics of umami and perceive it in their mouth. The lecture was given online by Dr. Kumiko Ninomiya – the UIC Consultant, relayed between Woosong College in Korea and Tokyo.

After listening to the umami discovery history and its characteristics, students tasted umami, which is essential for Japanese cuisine.

First of all, students carefully chewed a small piece of kombu to find the umami characteristics. Next they experienced umami synergy effect by tasting katsuo dashi and kombu dashi. They learned that umami is perceived 7 to 8 times stronger when the two umami substances, inosinate and glutamate, are combined.

Then they observed five typical types of kombu. The taste and aroma of kombu varies depending on types. They compared the taste of dashi prepared from different kinds of kombu; rishiri, rausu and ma-kombu. These three kombu are commonly used as dashi ingredients in Japanese restaurants and homes.

The students also learned difference among Japanese dashi and soup stocks of Korean, Chinese, and Western cuisine. Soy sauce, miso, and natto used in Japan and Korea are similar but not the same. Those foods have their own unique characteristics.
At the end of the lecture, students were given explanations on the effects of umami to contribute to a healthy lifestyle, such as its effects on salt reduction, satisfaction, and its relationship between soup consumption and obesity-related parameters. 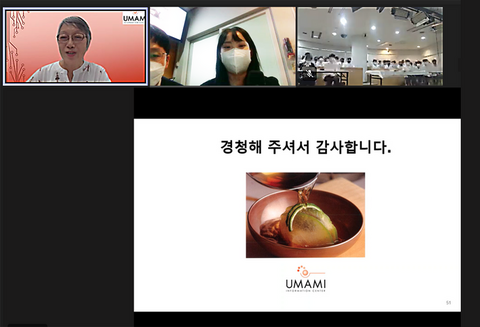 Students who attended the lecture gave a variety of comments. “I am glad I was able to experience the umami taste.", “I was able to learn more about the differences of kombu through tasting and observation than through verbal explanations alone.”, “I was impressed by the fact that the taste and aroma of kombu varies a lot depending on the types of kombu.”

Students also asked questions for example; “What is the difference between wakame and kombu?" *1, “Is it good to use MSG in cooking?*2.

We hope that students will acquire correct knowledge of umami in addition to the cooking skills and grow to be good chefs.

＊1: Wakame, a kind of algae, does not contain much glutamate. Japanese people often eat wakame in miso soup or salad rather than as dashi ingredient.

＊2: The glutamate in kombu and the glutamate in MSG are exactly the same. However, since kombu contains an aroma substance, the taste impression is influenced by its aroma. MSG is good to use when you want to add only pure umami taste to a dish, and since MSG has no aroma, it can be used in any cuisine anywhere in the world.